The Men’s Suit: The Suit Jacket in Detail 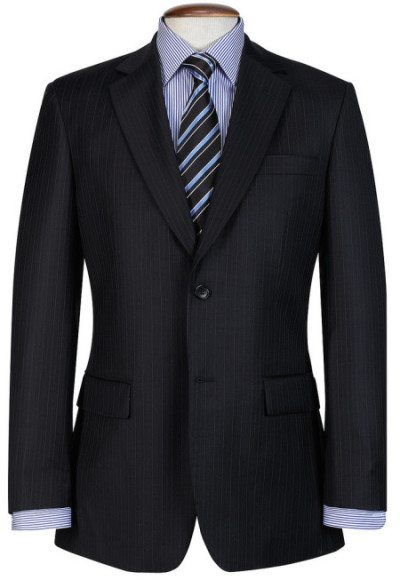 Having looked at an introduction of the men’s suit, it is now time to deepen our understanding with a more detailed exploration of its main component, the jacket.

A men’s suit jacket has many underpinnings and options, and each is an important part of selecting a garment that will flatter and enhance ones individual characteristics.

The first and perhaps most noticeable element of the jacket is whether it is a single or double-breasted suit jacket.

Single-breasted men’s suits have a single row of buttons down the front, and the jacket flaps only overlap enough to permit buttoning.

A double-breasted suit has two rows of buttons, and the front overlaps sufficiently to allow both flaps to be attached to the opposite row of buttons.

Being that it is a less common choice, a double-breasted suit will make the wearer stand out, and on the right man, can be an excellent choice.

Thin gentlemen, particularly those who are somewhat taller, can benefit greatly from double-breasted suits, as they will give a fuller appearance to the figure; on larger men, double-breasted suits can have a tendency to draw attention to the midsection, so careful attention and an expert tailor should be employed.

The jacket’s foremost obligation is to frame one’s face in a flattering manner and direct the eye upward towards it, assisted by the dress shirt and tie.

The width of one’s shoulders plays a crucial part in the perception of the face and head, and so form the first major element of the jacket. Wide, excessively padded shoulders shorten the neck and make the head seem excessively small, while unsupported, extremely narrow shoulders can make one’s head resemble a parade float.

For most men, the shoulders should be natural, supported but not over-padded, and should slope gently up, drawing the eye towards the head and face.

Additional padding can be added within reason to produce a more confident, commanding appearance and give the illusion of height, while a softer, more sloped shoulder can be used to offset extra height. 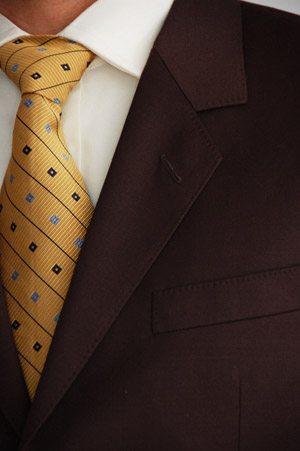 Attached to the shoulders is the collar, and with it the lapel, which stretches down to where the buttons begin.

Lapels come in a variety of styles with a number of options. The lapels’ width is perhaps subject to the most variance, with the extremely narrow lapels of the 1950s standing in stark contrast to the excessively wide lapels of the 1970s.

As is the case with much of classic fashion, the most timeless lapels are of a moderate width.

Notched and peaked lapels are equally classic, though the latter are most commonly found on double-breasted jackets. Shawl collars are almost exclusively limited to formal-wear, though they occasionally appear on ready-made suits – these should be avoided if a classic look is desired.

Where the lapels end, one finds the waist buttons. As previously indicated, a suit jacket has either one row of buttons or two, depending on whether it is single- or double-breasted. A single-breasted jacket has a single row of buttons, numbering anywhere from one to four, though two and three are most standard, while a single-button is generally limited to the tuxedo.

The three-button jacket, although a sometimes unfamiliar garment to those unaccustomed to wearing suits, is the most traditional configuration, taking its cue from English riding jackets; properly worn, it gives the illusion of height. 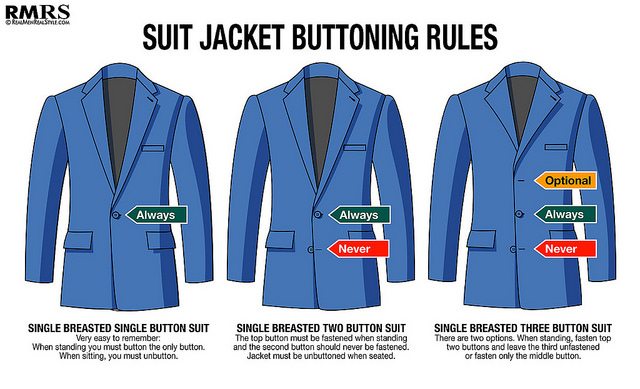 Only the top button of a two-button jacket is fastened; with the exception of a jacket with only one button, the bottom button of a single-breasted jacket is never fastened.

It is very common to see professional basketball players wearing four-button suits; the loud colors and wild patterns often chosen by celebrities, however, should be avoided by the gentleman. Unlike two- and three-button suits, where the bottom button is left undone, a four-button jacket is worn with all four buttons fastened.

Double-breasted jackets most commonly have either four or six buttons on each side – where there are six buttons, only the lower four are for buttoning, though due to the design of the suit, only two will actually be buttoned at any given time. There is also an extra hidden button on the reverse of the outside flap of a double-breasted suit, onto which the inside or “hidden” flap attaches.

As with the gorge of the lapel, the height of the waist buttons can be altered slightly to accentuate or diminish height, but this must be done carefully. 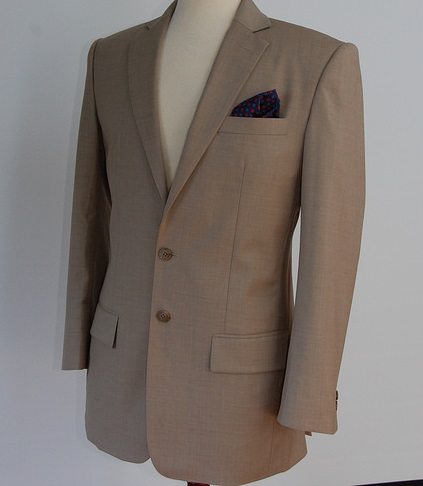 Inherent in all the above elements is the jacket’s length.

A jacket that is too short will expose undesirable portions of the wearer’s anatomy, while a jacket that is overly long will dwarf the wearer, potentially giving the appearance of a 1930s film gangster, or in the case of extremely long sleeves, an orangutan.

Because of the modern trend towards lowering the gorge and waist buttons on jackets, as well as the tendency of many men to wear their pants at their hips, rather than at the waist, most men have become accustomed to jackets that are too long.

A properly-fitting jacket will have its waist button just below the wearer’s actual waist, and should have sleeves that leave room for a minimum of 1″ of the wearer’s shirt cuff to be visible.

A very general way of determining if a jacket is long enough is to curl one’s fingers at the second knuckle around the bottom of the jacket.

If the jacket’s hem just reaches where the fingers join to the hand, then it fits properly; if the hem touches the curled fingers – or worse, bunches up – then the jacket is too long.

Another gauge is to measure from the top of the spine to the floor and divide in half. Both techniques, however, are only generalizations, and cannot take into account any unusual variations; performed correctly, both will give a relatively good measure for a ready-made suit, while a bespoke or made-to-measure suit will involve more accurate measurement.

In the same line, a jacket’s sleeves should be well fitted to the particular dimensions of the wearer’s arm, and should taper as necessary to avoid the appearance of flaring out towards the hand. The cuffs should be wide enough to allow free movement, though not so wide as to hang loosely when the arms are raised; likewise, they should not be as narrow as to resemble the elasticized cuffs on rain jackets.

Many other elements round out the details of the suit jacket – vents, pockets, buttons, and more — all of which lie within The Suit: The Jacket Completed.