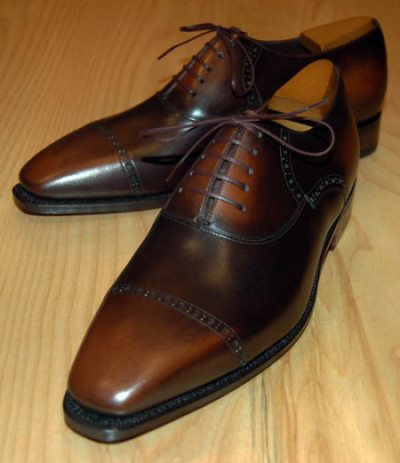 Men’s dress shoes come in many styles, and each has its place.

The particular constructions and colors one chooses are surely a matter of personal style.

Nonetheless, there are a few conventions one should keep in mind when selecting shoes for purchase, or deciding which pair to don on a particular day.

In general, the sleeker the shoe, the more formal; black is generally more formal than brown.

Lace-ups rank ahead of slip-ons, and closed lacing is a notch above open lacing.

(In the closed lacing construction, the sides of the shoe emerge from the top side by side and fan slightly outward to form a V where the laces tie them together.

A shoe with open lacing has separate side pieces folded over the tongue to meet at the center). Broguing–rows or patterns of perforations–take shoes down in formality, the more so the more there are.

Please Note – These are edited photos from the fine men’s shoe store Leffot – Contact them if you wish to purchase shoes.

The gold standard of dress shoes, the Oxford bal features round toes, usually with a cap, and closed lacing.

Plain cap-toe Balmoral Oxfords are the most formal option for business wear, and can do double-duty as black tie formal shoes.

Oxfords with broguing along the cap’s edge, or trimming the uppers, are still formal enough for a worsted wool suit; ‘full brogues’ are more appropriate with tweed or flannel.

If you own one pair of dress shoes, they should be black Balmoral Oxfords; Allen-Edmonds Park Avenue’s, made in the United States, are an irreproachable selection and well worth their price. Alden is another great manufacturer to consider.

The Derby and Blucher Dress Shoes 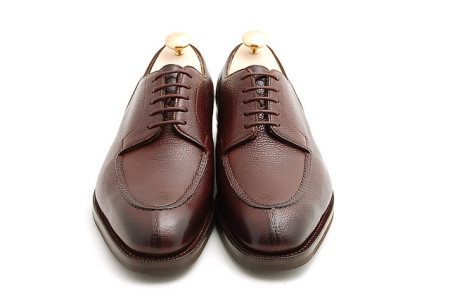 The Blucher or Derby as it is sometimes called is similar in shape to the balmoral oxford (and is in fact an oxford, though rarely called so), but bears open lacing and is therefore considered less formal.

It is still appropriate for wear with a suit in the United States (though be careful overseas), and supports a khakis and blazer look more naturally than the balmoral oxford.

The blucher is a slightly sleeker open-laced shoe of similar versatility.

Plain or with a brogued cap, these dress shoes will match a suit in formality; with more decoration they carry a blazer well. In suede, rather than smooth leather, these are among the best shoes to wear with jeans or khakis although a sharp dresser can pull of this look. 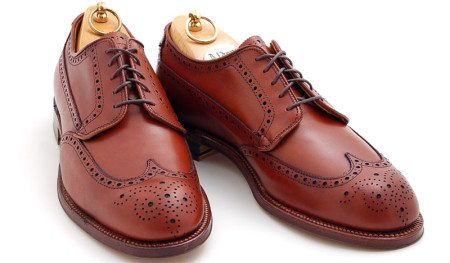 The wing-tip, with a brogued cap coming to a point at the center of the top curving back and down along the sides, is suit-level in black and business casual in brown – the latter matching very well with gray flannel trousers.

In the United States, it is associated by many with Ronald Reagan and the eighties in general, and in any country it is going to draw some attention to itself.

This is not necessarily a bad thing, of course, but it does reduce the shoe’s potential for frequent wear.

While you might wear the same pair of brown Oxford’s three days a week without anyone noticing, the man who wears wing-tips more than weekly risks having them integrated into his reputation. 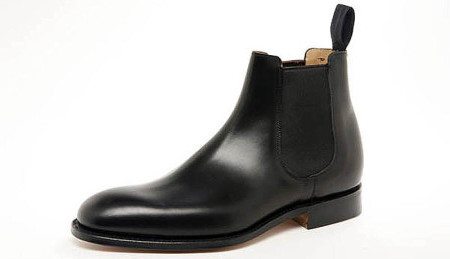 Dress boots bring some ruggedness to dress footwear, making them a worthy option in the winter.

In addition, their slip on and off feature along with superior comfort make them a favorite among travelers and those not requiring the formality of the oxford balmoral.

In the same family, but of a more regional nature, is the cowboy boot.

Although men like former Texas congressional representative Charlie Wilson could pull this off, most men might want to skip on this unless they are an oil magnate. 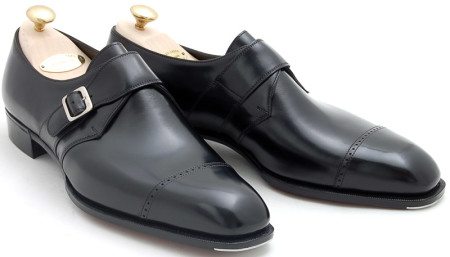 Slip-on shoes are casual by nature.

Tassel loafers, which are exactly what they sound like, are accepted as business formal in some circles while relegated to weekend wear in others.

Casual slip-ons can be worn with jeans; dressier variants should be matched with an odd trouser. 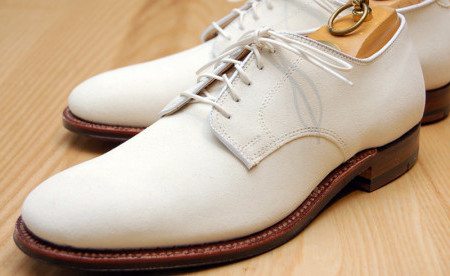 White bucks are Oxfords made of white buckskin, a rough leather than in reality is not exactly white.

They are the traditional companion to the seersucker suit, and equally complement such summer fabrics as tan gabardine and white linen.

Thus, they could be called professional between Memorial Day and Labor Day, or during whatever one considers summer.

Patent leather oxfords are the most formal of men’s shoes; they are standard with a men’s tuxedo, and clash with most everything else.

Opera pumps, shiny black slippers with a bow on top, are another option for formal wear and have been worn by kings, statesmen, poets, and other well dressed men for 100 years.

Previous Post: « Men’s Dress Shoes: The Importance of Quality Footwear
Next Post: How to Dress for Your Wedding – The Groom’s Guide »