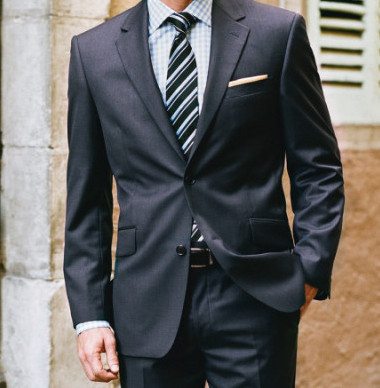 The first thing anyone notices about a man’s suit – before the cut, the number of buttons, the proportions – is the color.

First impressions are incredibly powerful, and so it becomes obvious that the color of ones suit isn’t a decision to make lightly.

It need not, however be a daunting task; like much of the rest of classic style, suit color is governed by a few simple rules that, once learned, make color selection an easy task.

The first bit of information to learn is that when it comes to suits, all colors are not equal.

There are certain colors that are appropriate for any occasion, and others that while suitable for one occasion would be completely out of place at another.

Also important to know is that some colors are limited by season, while others have particular associations that, if unknown, could produce unexpected results for the uninformed wearer. 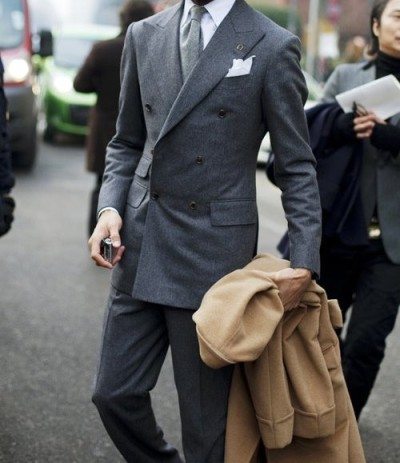 The single suit – that is, a suit for someone who rarely has cause to wear it, and thus has just the one suit.

This is often a “wedding and funeral” garment, as it will only be worn to an event where a suit is mandatory.

In such a case, the suit needs to be as broadly appropriate as possible, so that the wearer will not be out of place at whatever event causes him to don it.

A dark, conservative suit is what you want; black, navy blue or charcoal gray are all equally acceptable. However, if you have to choose one, lean towards charcoal gray as it is perhaps the most versatile.

Beyond a Man’s First Suit

With that resolved, we can begin to discuss the range of colors available to those who have the occasion to wear suits regularly.

While designer fads tend to shift quickly, causing the suit and its wearer to appear dated and out-of-touch, a traditional suit remains elegant and stylish, its useful life tracked in years or decades, rather than weeks and months.

This is especially important in very formal professions such as politics, finance, and law, but applies more generally to any profession where a conservative, traditional appearance is desirable. 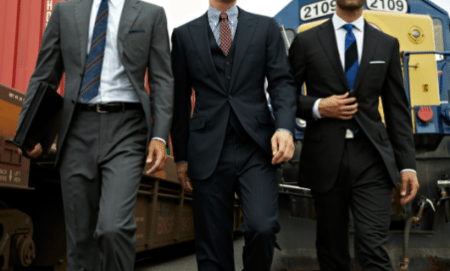 The traditional colors for men’s business suits are black, navy, and gray.

Every wardrobe should be built off a selection of dark suits, as that they are appropriate in almost any circumstance.

Which colors depends on the preference of the wearer, but the vast majority of men would do well to own one of each of the foundation colors – Charcoal Gray, Black, and Navy Blue.

Charcoal gray is a great color for the young man; unlike navy blue it does not accentuate his youth.

It is extremely versatile, and has the unique ability to be paired with either black or brown elements depending on the shade of gray.

A black suit makes itself useful due to its similarity to formal wear, as well as its habit of projecting a sense of authority.

Finally, navy blue suits are excellent choices because of their sheer commonality; you can rest assured in a room of men in suits more than half will be wearing this color.

In addition, it is a very traditional and elegant color, and should be added to the above at the first opportunity. Any of these shades can be had in a pinstripe, though the presence of a pattern somewhat downplays this fabric’s formality. Not to worry, it’s perfectly acceptable for all business occasions.

Brown is another popular base color for suit fabric, with options ranging from tan through to deep chocolate hues.

Many men look their best in earth-tones, making the brown suit an important part of their wardrobe; it is also a popular color for casual options including tweed suits and sports jackets. 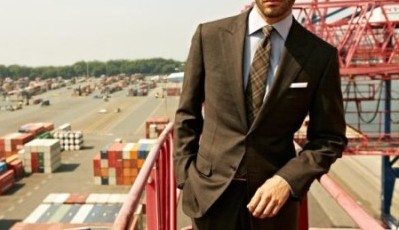 One caveat: until the early 1980s, brown was not considered a color for business.

While the times have changed, making brown just as appropriate for business as black, navy, or gray, there are still some members of the old guard who continue to hold to the old rule.

This shouldn’t dissuade the well-dressed gentleman from wearing brown with confidence, but it is important to be aware.

Business aside, there are a wealth of colors available to the well-dressed gentlemen.

Brown tweed evokes the cold, rainy moors of the English countryside, while ivory-hued linen speaks of the steamy tropics. Stripes, checks, and other patterns are such varied options that they merit their own discussion.

Within all the variations, the deciding factor on which particular choice to make is one’s individual coloring, a combination of hair and eye color as well as skin tone.

Many fail to realize that an ensemble that flatters a person of one coloration most likely will not flatter differently-complected individuals; it is important to pay attention to what is emphasized and what is camouflaged by the colors of one’s clothes.

While the most accurate way to match attire with one’s coloration is through trial-and-error, there are general guidelines to point in the right direction.

One important note about trying various combinations in front of the mirror: pay attention to the lighting.

Fabric color appears different under florescent lighting than in natural daylight, so it is important to be aware of how clothes are affected and make selections based on the lighting in which the ensemble will be worn.

Special Cases – Be aware of your Complexion

The traditional men’s suit colors of black, gray, and navy remain viable options for all but the most high-contrast complexions, as most of the decisions related to complexion surround shirts, ties, and accessories, rather than suits.

For this reason most gentlemen will have little to fear as long as the chosen suit is in one of the traditional colors.

Very high-contrast individuals, however, including those with very dark hair matched with fair skin, and in particular African-American skin tones, require a bit more care, as the wrong color suit can dampen the wearer’s features or even make them seem to disappear outright.

The fair-complected, dark-haired gentlemen will do well to favor dark, rich suits which frame his light features between the dark jacket and hair; light colored suits, including pale grays and tans, will serve to diminish his features.

African-American men may fare better in dark or light suits, depending on their particular skin tone; a dark suit with a light colored shirt provides excellent contrast for the very dark-toned gentleman, while a more muted shirt and tie with a dark suit helps to give the more medium-toned wearer a warm look.

Finally, the light-toned man may be best served by light colored suits in earth-tones, which will harmonize more readily with his lower-contrast complexion.

With a mastery of color firmly within ones grasp, it is now time to move on to the next set, the more advanced options discussed in The Suit: Exploring Patterns.