A Man and the Double Breasted Suit Jacket 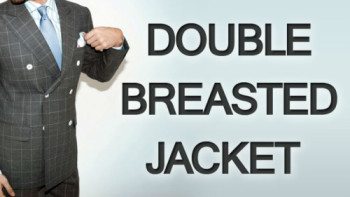 Every coat that has a collar and lapels, whether sport coat, suit jacket, or overcoat, is either single-breasted or double-breasted.

The single-breasted construction is much more common, and consists of buttons on one edge and button holes on the other, meeting in a vertical line over the navel.

The double-breasted coat bears symmetrical sets of buttons on each side, with the left side folding over the right to be secured by one or two of them.

Single-breasted jackets are easy to find and look good on just about everyone.

Whether blazer or suit jacket, it can be made with two or three buttons, wide or narrow lapels, and high or low gorge, according to the particular needs of one’s body. For every man, there is a single-breasted configuration that is guaranteed to look handsome.

For this reason, the model as it has evolved over two-hundred years today holds the center-place of men’s style.

While the double-breasted coat demands a greater investment of time and effort to acquire and wear successfully, for many men the payoff is fantastic.

Reasons to Pass on a Double Breasted Jacket 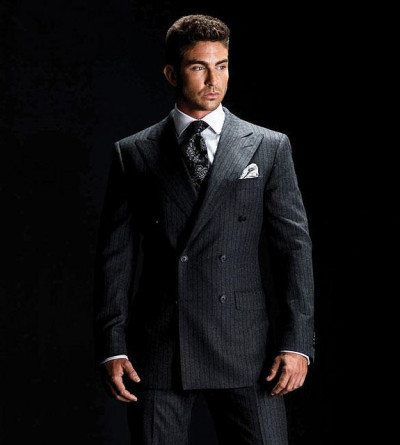 With an extra layer of fabric across the front and two rows of buttons, the double-breasted jacket is enough to drown a smaller man’s frame.

Those of narrow torso and shoulders will find it covers almost their entire chest, barely allowing the shirt and tie a glimpse of daylight.

Neither is it friendly to short men, as its bulk can diminish height.

The double-breasted suit is also more formal than the single-breasted, and is therefore less versatile. It is anachronistic over anything other than a conservative dress shirt and neck tie.

It looks ridiculous unbuttoned, and must therefore always stay closed, and this combined with its double-ply front can make it uncomfortable in the heat.

Finally, double-breasted suits have waned in popularity over the past half-century, and it is therefore quite difficult to find one that fits correctly.

Nevertheless, for the man who can wear it, the double-breasted suit provides a rare opportunity to don a more stylish garment without attracting undue attention.

To the casual observer a double-breasted suit differs little from a single-breasted one, but on closer examination it yields an older, more elegant look.

While it is indeed hard for most men to find one that looks really superb, when custom made its length, gorge height, button stance and lapel roll may each be selected to amplify a body’s virtues and distract from any shortcomings.

The double-breasted coat always sports peak lapels, and these contribute to its superior refinement. The original style has six buttons, with two to close.

While this suits tall men well, shorter men do better with a four- or six-button configuration in which only the bottom one closes (the four-button double-breasted jacket is sometimes called the “Kent,” after it’s supposed inventor the Duke of Kent).

The long, diagonal lines of lapels rolling to below the waist give the impression of height and downplay width. Indeed, a well-cut double-breasted jacket minimizes girth on all portly men, especially if it has broad shoulders to drape from.

The Double Breasted Suit and Accessories

The accessory rules when wearing a double-breasted suit are very similar to single-breasted suits. When it comes to neckwear, either a bow tie or neck tie can be worn.

However, the presence of no neckwear whatsoever is a definite style blunder, as that the double-breasted jacket’s formality by default demands something to adorn the neck. 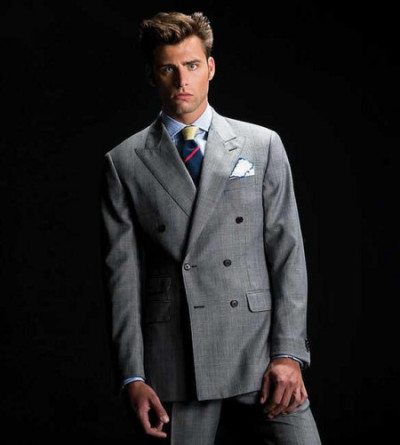 A necktie’s width has always been determined by the jacket’s lapel, although with the double breasted jacket this can be difficult when they are wider than four and a half inches.

Average lapel widths range from 3.375 inches to 4.25 inches, with most double-breasted coat lapels leaning towards the later.

A necktie within the width range of 4 inches is always a safe bet.

More important than the width of the necktie however is the tie’s knot; with 70% of the tie hidden under a buttoned jacket, the knot takes center stage.

Be sure to pay attention when you compress the knot to form a strong inverted “V”.

With the tie knot’s proximity so close to your face, a blunder here will surely not go unnoticed.

While every man will own and wear single-breasted jackets, going double-breasted provides a special opportunity to broaden one’s sartorial horizons without straying from tradition.